Welcome To Our Office in Broken Arrow, OK . Request Your Appointment Today 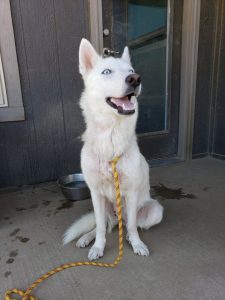 Renfri happy in her new home in Broken Arrow, OK.

Heartworm treatment is “ruff.” Last week, we finished treatment on Renfri, a gorgeous, young, white husky. Despite her short life (we estimate her age to be less than two years), she has quite the story: found by a family in Ketchum, OK, Renfri was injured, severely malnourished, and infested with parasites. After 3 weeks of trying to find her owners, the family posted her in an Oklahoma rescue group online. Our amazing assistant, Jess, offered to privately foster her at that time.

First things first: after bringing Renfri home to Broken Arrow, an exam and bloodwork with her veterinarian was in the works before getting her spayed. That’s when Renfri was diagnosed with heartworm disease and her treatment began.​

Effective heartworm treatment is a lengthy, expensive, and painful process.
​Day 1: Renfri was started on heartworm prevention (Jess chose Interceptor, a monthly chewable) and 30 days of the antibiotic doxycycline in order to eliminate the bacteria Wolbachia, in the heartworms themselves. This would help to weaken the worms. Jess got a lot of practice getting pills down an unwilling patient’s throat! Once the 30 days of antibiotics had passed, a 30 day rest period began, allowing the Wolbachia to completely dissipate. In the meantime, monthly doses of Interceptor is eradicating microfilaria, a stage in the heartworm life cycle. Doing so protects the dogs around Renfri; mosquitoes can spread the microfilaria to other unprotected canines.
​
Day 61: Renfri had x-rays taken of her heart, and she received her first Immiticide injection. Immiticide contains the drug melarsomine, which kills adult heartworms. Melarsomine does so much more quickly and effectively than monthly heartworm prevention (like the Interceptor that Renfri was started on), which is crucial in controlling permanent damage done to the heart (and sometimes the lungs). Unfortunately, the injection hurts. A small area of skin just to the right side of Renfri’s lower spine was shaved and sterilized, and the Immiticide was injected deep into the muscle. She was also started on pain control, steroids, and her monthly Interceptor.

From this point on until treatment ends, poor Renfri is strictly limited to cage rest and leash walks only. Could you imagine no longer being able to wrestle or play chase or fetch with your dog? Having to leash him or her every single time they needed to go outside or someone rang the doorbell? An accelerated heart rate disturbs the dying worms; broken pieces are often lodged in the lungs being reabsorbed by the body, and any stress on those blood vessels is very dangerous. 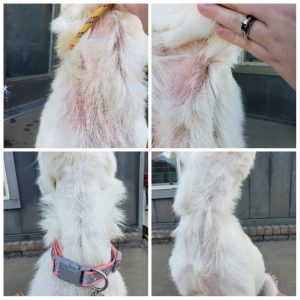 ​​Day 90: Renfri is seen by Dr. Nickle at Animal House Veterinary Hospital in Broken Arrow, OK for her second Immiticide injection. We’re almost done! She gets her next dose of Interceptor, more pain medication (seriously, that injection is painful), and another steroid prescription. This injection was on the opposite side of her spine, and tomorrow the last shot will be administered on the right side again. Poor Renfri just wants to play! Heartworm prevention is easy and affordable, and it would’ve saved her from undergoing the painful protocol for treating a deadly disease.
​
Day 91: Renfri’s veterinarian administered her last Immiticide injection. Renfri gets 6-8 weeks of exercise restriction, and Jess gets more practice administering oral medication. They’ve both mastered the routine by now! In three months, Renfri will have her blood drawn and assessed for the presence of microfilaria (an organism indicative of heartworm infestation, remember). If microfilariae are found, she’ll be treated and retested in another month. 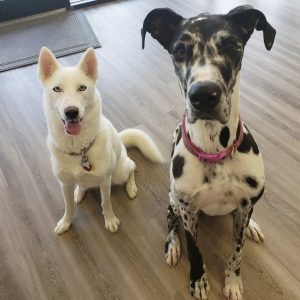 In nine months (can you believe it will have been a year since this process was started?), Renfri will be tested again. If she’s still positive for heartworms, she’ll receive two more Immiticide injections 24 hours apart, which means more pain and steroid prescriptions, more exercise restrictions, more budget limitations. However, if she’s negative, she can be spayed, and Jess can begin the process of finding a forever home for her.
​
Heartworm disease is preventable! It’s easy, it’s affordable, and it protects your dog – and other dogs around him – from a deadly, painful disease. Renfri is young enough that the diagnosis was made early, so the damage to her heart will hopefully be minimal. Thank you to the veterinarians in the Broken Arrow and Tulsa area who helped Renfri fight and win. She’s lucky. Another dog might not be.

Font Resize
Contrast
Accessibility by WAH
Call Us Text Us